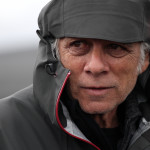 « I like movies where there are different truths -as in life. I take the concept movie literally and seriously work with a lack of seriousness. A relationship rescue attempt, a car breaking down and a gun in the middle of nowhere give me permission to make mischief as an author.»

« As a spectator I like the ‘cinema d’auteur’, where I’m not taken by the hand, but can explore the events myself. I then see the film as my fellow spectator, laughing with me.»

“Even on previous films I’ve hung around in the deserts. This exemplary space fascinates me. As the canvas or a piece of white paper, the desert is a blank screen. Before “Welcome to Iceland” I’ve never been to Iceland.
But I have seen pictures of this almost alien landscape. I imagined that a small plane simple exposes a man with a suit and tie in this no man’s land. I was wondering, what’s going on and started to write.”